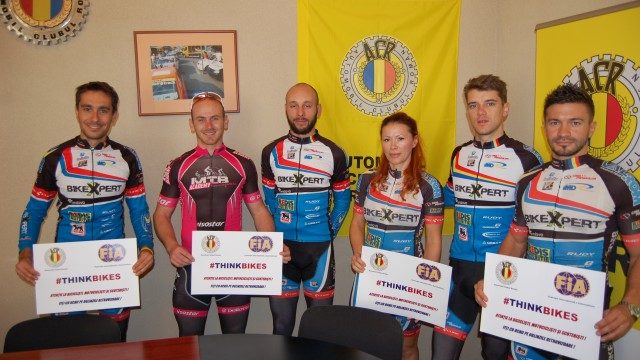 Think Bikes has been launched in Romania on the 15th August 2015, during the Regional Stage of the Cycling National Competition ”Road Safety Education – Education for Life”, attended by teams composed of kids aged 6 to 14 years, coming from 17 counties, together with a large number of teachers and road safety trainers. The competition was setup by ACR together with the Education Inspectorate of the Vaslui County.

The campaign was also supported and promoted during the stages of the National Cycling Championship 2015. Among the athletes who supported and promoted the Think Bikes Campaign in Romania, there are many national champions and vice-champions in road cycling competitions, mountain bike, velodrom, cycle cross, both for beginners and professionals, nationwide. The most important champions took part, in the ACR head office, at a debate regarding safety on roads for cyclists, motorcyclists and scooters.

At the same time, the cycling clubs, the motor sport clubs within ACR and many ACR volunteers helped distributing over 7000 stickers and flyers.

At the beginning of September, the Think Bikes campaign was also promoted during the events that took place all over the country for the development of “Rescue Sheet on Board” project, together with other ACR partners. These events enjoyed great audience among the road traffic participants.

Over the coming weeks, the ACR plans to promote the Think Bikes Campaign together with one of the largest taxi networks from Romania, estimating that the messages of the campaign will reach locations with a higher risk for cyclists, motorcyclists and scooters.

The ACR “Autoturism” magazine will also promote Think Bikes in the next issues. The goals and the activities in Romania, go beyond ACR members or to Club partners and reach the entire public.