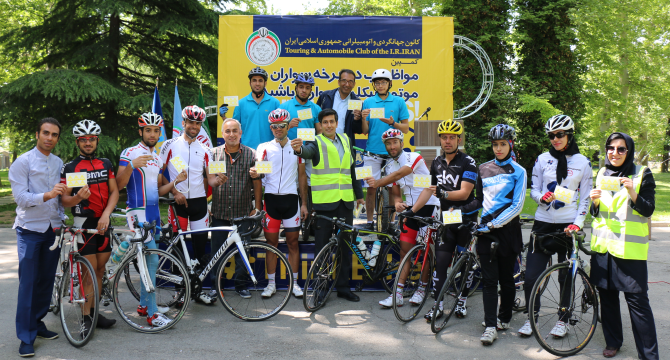 On 27 April, TACI launched the “Think Bikes” campaign in Iran to raise awareness for vulnerable road users on bikes, motorcycles and scooters.

“Motorists can help prevent crashes with cyclists by taking care to follow the rules and road safety actions. Cyclists, in turn, can make themselves safer and respected. They should cooperate with drivers following the same traffic laws as motorists”, said TACI President Abolghasem Iraji at the ceremony.

The campaign’s inaugural ceremony took place at the open area of the Niavaran Cultural and Historical Complex, with the help of cycling and motoring organisations and Iranian cycling and motorcycling champions with the support of the government and stakeholder organisations. Initially, sixty thousand free stickers are being distributed to drivers as a reminder to ‘check your mirrors’ for cyclists and motorcycles.