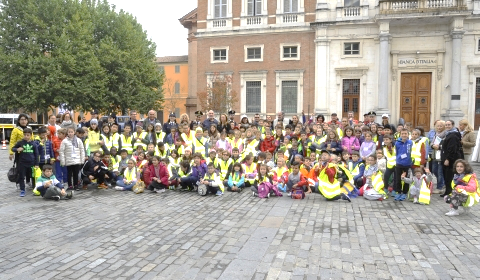 Automobile Club d´Italia (ACI) launched the Think Bikes campaign on 3 October 2015 in Reggio Emilia, Italy with an event entitled ‘2 Ruote Sicure/Safe Bike’. The event opened with more than 200 children who experienced how to cycle safely in a city square.

The children, after a lesson on road safety, passed from theory into practice on a circuit set up on the site. At the end, they received a symbolic ‘driving license’ after passing the test. Over 1,000 Think Bikes stickers were distributed to the adults accompanying their children.

The event ended with a conference on cyclists and road safety. Speakers analysed the increasing use of this means of transport in Italy and the relative increase of cyclists involved in road accidents, often fatal. The cause of these accidents is often driver distraction: in many cases, in the chaotic traffic of some cities, it proves to be hard for drivers to see the cyclists. The conference was attended by local and national institutions and the Italian cycling champion Gilberto Simoni.

In this regard, ACI highlighted the aim of the campaign Think Bikes promoted by the FIA: a sticker for the side-view mirrors as a reminder to drivers that there are also cyclists and motorcyclists on the road.