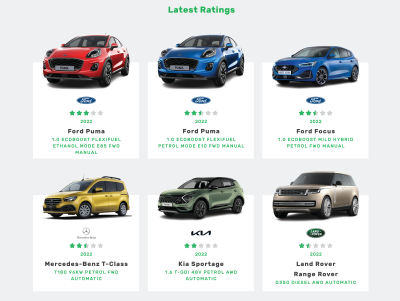 Bioethanol is an alternative fuel of growing interest in some European countries, particularly in France, where prices are significantly lower, infrastructure is gaining in capacity and the number of flex fuel cars registered represents 2.2 % of vehicle registrations. The CO2 emitted by a bioethanol fuelled vehicle, is absorbed from the atmosphere by the biomass source while the plant is growing, therefore no new CO2 is added to the environment. If you consider the entire life cycle of a biofuel, there are also greenhouse gas emissions related to the production and supply of the biofuel – for example emissions from nitrogen fertilization during raw material cultivation in agriculture and the conversion of biomass to ethanol due to the use of fossil energy. In the test with E85, the Ford Puma Flexifuel scores an impressive 6.9/10 points in the Greenhouse Gas Index, which is a significant improvement on climate impact compared to the score of 3.7/10 achieved by the same vehicle running on standard petrol fuel. Overall, the Ford Puma 1.0 EcoBoost Flexifuel achieved a three star rating running on bioethanol E85, whilst the results were sufficient for a two and a half star rating in the standard fuel case.

The Mercedes T-Class is a multipurpose utility vehicle and, in general, petrol consumption of around 7 l/100 km can be expected. However, in the highway test the number rises above 9 l/100 km. Closely related to the consumption is the amount of emitted CO2 emissions and here the T-Class receives only 1.7 points, despite the bonus points granted for excellent methane and nitrous oxide control. The car scores particularly well in the Clean Air index, where it demonstrates high performance in reducing its polluting gases. The results are creditable, with minor deductions for particle and ammonia emissions. Thanks to that index, the Mercedes Benz T180 delivers two and
a half Green stars.

The Range Rover D350 is a large and heavy luxurious SUV, equipped with a six-cylinder diesel engine with a power of 258 kW. Its mild-hybrid system cannot reduce the consumption to levels which would allow Green NCAP to award it higher results in the Energy Efficiency and Greenhouse Gas indices. The consumption figures and the related greenhouse gas emissions are fair for a vehicle of this type and mass, but still constitute a large impact on the environment. This British SUV scores one and a half Green stars.

The Ford Focus, with its design and functionality, appeals to a broad audience and continues the popularity of its Focus predecessors. The fuel consumption results allow consumers to cover most drives with 6-7 l/100 km, whereas short urban trips are expected to require more. The exhaust aftertreatment works well in the warm laboratory test but loses robustness when starting with cold powertrain or under high power demanding conditions. Addressing the weak spots of pollutants control would help the Focus easily reach more than a two and a half star rating.

The Kia Sportage 1.6 T-GDI with a 48V mild-hybrid system would benefit from better particle control, as well as higher robustness in reducing ammonia and carbon monoxide output. The vehicle is a relatively large and heavy SUV, and this is reflected in the car’s energy efficiency performance. The Greenhouse Gas index is the area where the tested Sportage performs most poorly. Although methane and nitrous oxide are well controlled, the CO2 emissions measured at the tailpipe are substantial. This is caused directly by the relatively high fuel consumption levels. The officially declared CO2 value and fuel consumption match Green NCAP’s results. In total, this is enough for two Green stars.

‘In the transport sector there are a range of possibilities that will contribute to a reduction in greenhouse gas emissions, depending on the local situation and available resources. In the transition phase to clean and green mobility, full powertrain electrification could be effectively supported by other climate friendly options such as biofuels. Biofuel blending – FAME and HVO to diesel (B7) and bioethanol to gasoline (E5, E10) – is state of the art in Europe and required by law. If surplus bioethanol amounts are available, the blending share can be increased and E85 could be a viable fuel for some applications. In the short term, flex fuel vehicles are a cost effective and efficient technical choice in the transition, provided the ethanol used complies with sustainability and socio-economic criteria. Here at Green NCAP, we congratulate Ford for placing the Puma as a flex fuel option on some markets’ says Dr. Aleksandar Damyanov, Green NCAP’s technical manager.