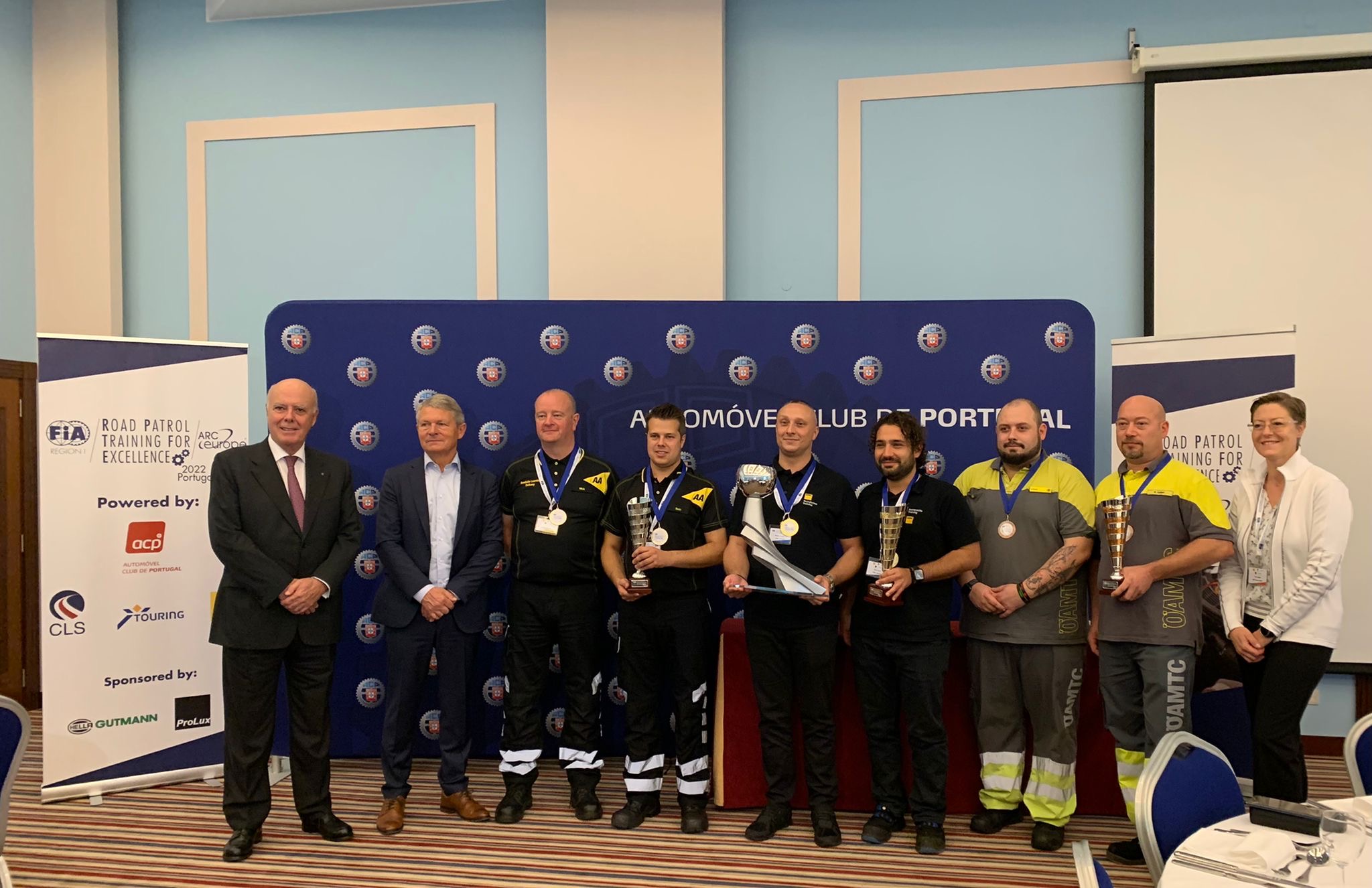 This year’s Road Patrol Training for Excellence was organised in Lisbon, from 17 to 20 October, with 16 road patrol teams joining the training. This year’s event was kindly hosted by the Automóvel Club de Portugal (ACP).

ADAC (Germany) won the first place and was awarded Road Patrol Team of the Year, while The AA (United Kingdom) and ÖAMTC (Austria) won second and third place respectively.

The Road Patrol Training for Excellence is a yearly event composed of two days of training and assessments, organised by FIA Region I and ARC Europe. The training aims to increase the overall standard of roadside assistance services offered by the participating road patrol teams and to achieve a universally high-level quality of services offered by both FIA Region I Clubs and ARC Europe Group members.

Thomas Møller Thomsen, FIA Region I President, who was present at the event, praised the participant clubs, “Your participation means a lot. It is not an easy decision to put your skill and knowledge to the test together with other Clubs.”

Ilaria Caputo, CEO of ARC Europe, spoke about the importance of doing training like these ones, “From some of the workshops that have been conducted over the last two days, it is clear that ARC Europe, through the collaboration with its network, will continue to work on the standardization of the safe handling of electric vehicles and charging stations. But we do not have to forget that combustion engines vehicle will remain a core component of our training plan, with a stronger focus on new technologies and systems.”

Carlos de Alpoim Vieira Barbosa, ACP President, was very pleased and proud of the event, “With the beautiful Sintra mountains as inspiration and amazing Cascais seaside for our social event, I hope that you enjoyed your stay in Portugal, like we enjoyed welcoming you all in our country. I’m certain that networking and sharing experiences, alongside with the competition itself had been quite successful.”

ADAC (Germany), the winning club, did not expect to win but they were clearly joyful to have won, “It feels like we climbed a mountain and now are standing on the top. We arrived at this event hoping for a place in the top five, not surely a victory! We know our worth and we know we are good, but the victory was still a surprise – a very nice one!”

The Road Patrol Training for Excellenct 2022 was a success; clubs were very pleased with the organisation, the hospitality of ACP and the quality of the workshop content. They found the participation at this event relevant to their daily work and it has to be said that the difference of the scores between the teams in top five was very small, showing a high and equal level of quality of all the clubs.

AA South Africa, who participated for the first time this year, expressed their gratitude to have participated in the training, “My eyes are wide opened, and I absorbed so much in two days. The knowledge shared in some of the workshops are exactly what my team at home would need. I am going home with a shopping list and information that can help to better our service.”

This year’s trainers came from The Touring Club of Belgium (TCB), the Automóvel Club de Portugal (ACP), Auto-Moto Zveza Slovenije (AMZS) and Club Logistic Services (CLS).  Hella Gutmann was the silver sponsor and Prolux was the bronze sponsor of this 2022 event.