IT ONLY TAKES 2 SECONDS: FIA REGION I CAMPAIGNS AGAINST DISTRACTED DRIVING 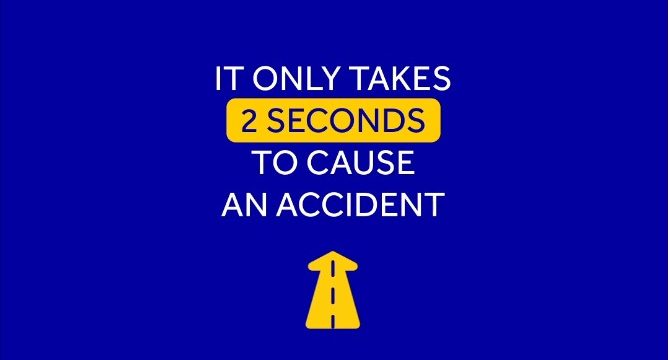 Distraction is developing into a major road safety risk – just 2 seconds is enough to cause an accident. Up to 25% of road crashes are due to distraction, with 25-30% of total driving time spent on distracting activities.[1]

Commissioner Bulc, European Commissioner for Transport warned against distraction caused by the use of mobile phone “Distraction from mobile devices has become one of the top crash factors. Reports show it has even overtaken speed and alcohol as the highest risk factors.”

She therefore recognised the value of the 2seconds campaign in raising awareness of the risk of distraction among road users: “Technology can help, and the EU is making sure that everyone benefits from it: making driver drowsiness and distraction warning systems mandatory for all cars in its new vehicle safety legislation. But this can only be an assistance to drivers. It is crucial that all road users are aware of the high risks of even short spans of inattention. This is why I fully support the 2seconds campaign. To achieve zero road deaths by 2050 in the EU, we need to do everything we can – together. Let’s raise awareness that distraction kills.”

With the #2seconds campaign, FIA Region I and our national member Clubs are raising awareness on distraction, stressing that even very short lapses of attention can have dramatic and even fatal consequences.

Whether you’re a motorist, pedestrian or cyclist, you’ll know that dealing with traffic demands your constant attention. If motorists are not trained on new in-vehicle safety technologies proper use, they can also become a source of distraction.

With this in mind, Region I member Clubs are currently working hard to raise awareness and train drivers on new safety technologies.

“Technology is increasingly supporting drivers, whilst at the same time creating numerous opportunities for distraction. As long as vehicles are not able to overtake the driving task completely, drivers need to understand that their full attention should be on the road, every second. This is why we launch this campaign today via 33 member Clubs in Europe, the Middle East and Africa. Together, we hope to reach tens of millions of road users.”

The FIA Region I road safety campaign is supported by the FIA Road Safety Grant Programme.