Green NCAP finishes off the year with a final batch of five cars, ahead of some big test changes in 2022. The all-electric Lexus UX 300e and Nissan LEAF e+ both achieve a maximum five-star rating. Two Plug-in Hybrids – the Renault CAPTUR E-TECH and Volkswagen Golf 8 GTE – are awarded three and a half stars and the only pure combustion engine car of the batch, the Audi A3 Sportback 35 TDI, is still scoring a creditable three stars.

So far, Green NCAP rates cars only on tailpipe emissions, so electric cars – which emit no tailpipe gases – have a head-start. Both the Nissan and the Lexus take full advantage to reach a maximum star rating, based on the combined performance in clean air, greenhouse gas emissions and energy efficiency. Only in the latter, do these EVs lose a fraction of a point – the Lexus doing so mainly because of the energy used to heat the vehicle interior in the cold ambient (-7°) test. Green NCAP also measured a driving range considerably lower than that claimed by Lexus, a result of the more realistic tests used compared to regulation.

In 2022, Green NCAP will base its assessment of Greenhouse gases emissions on a well-to-wheel analysis, meaning that the environmental impact which went into the production of the energy source will also be included. This will give a better indication of the true environmental footprint of cars to consumers, especially for electric vehicles.

Alex Damyanov, incoming Technical Manager for Green NCAP explains, “Looking only at tailpipe emissions flatters all-electric vehicles by ignoring the energy consumed in producing the electricity they use. We know that, and we are working to refine our rating scheme to reflect that fact. Next year, we plan to also provide consumers with a total life-cycle analysis (LCA) which will allow them to see for themselves which car offers the cleanest mode of transport, depending on the use they make of the car, where their electricity comes from, where the vehicle is produced and how it is ultimately salvaged.”

The two PHEVs are joint-second in this round of tests, the Golf 8 GTE and the CAPTUR E-TECH Plug-in 160 achieving three and a half stars apiece. As with all PHEVs, they perform best when the battery is regularly charged but both also have efficient exhaust after-treatments which keep emissions low when running on petrol.

Finally, the diesel-engine Audi A3 Sportback 35 TDI scores very well for Clean Air and for Energy Efficiency but is let down by mediocre performance in reducing greenhouse gases. Nevertheless, a rating of three Green NCAP stars is a solid performance for a traditional, diesel powered car. 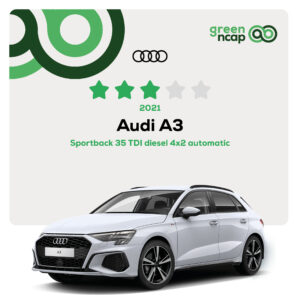