A new study, commissioned by FIA Region I, demonstrates that a model for access to in-vehicle data, functions, and resources, alternative to the one currently commercialised by vehicle manufacturers, is possible and offers more secured and future-proof features.

Vehicles are increasingly connected, opening the road to new remote services and interconnected traffic. For society to fully benefit from this digitalisation, access to data and functions must not preclude innovation and competition and be secured against attacks on the integrity of vehicle systems and data theft. 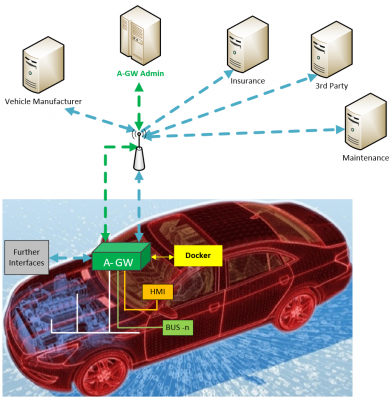 This delicate design balance between access to in-vehicle data and functions on one hand, and a state-of-the-art level of security on the other, is ensured by the secure On-board Telematics Platform (OTP), presented in the study. In the OTP, the administration of access to in-vehicle data is performed by an independent and neutral administrator, respecting the separation-of-duties principle. The OTP model solves, therefore, one of the main flaws of the Extended Vehicle model, where vehicle manufacturers, acting as both service providers and data controllers, maintain full control of the automotive aftermarket, hindering competition and innovation as they become data monopolists.

Equally importantly, the OTP puts consumers in the pilot seat of data traffic: it is for the driver or vehicle occupants to choose which data may flow in and out the vehicle, by conveniently opting-in or out of services, and being able to actively select their preferred service providers, at any point in time.

FIA Region I Director General, Laurianne Krid, commented: “This study offers a concrete, secured and better alternative to the Extended Vehicle model, allowing for inherent flaws of the data access system proposed by vehicle manufacturers to be overcome. Flaws that, otherwise, will cost billions to the consumers, independent services providers, and society as a whole”.

Indeed, in a previous study, FIA Region I found that, by 2030, the adoption of the Extended Vehicle could lead to consumers and independent service providers having to absorb costs of around €65 billion per year.

FIA Region I calls upon the European Commission to implement legislation to mandate manufacturers to fit the proposed OTP and associated security measures in all newly registered vehicles as of [2024].

Vehicle security concerns are not an exclusive European problem, and can be seen in many countries around the globe. Therefore, FIA Region I will also propose similar measures to be taken at the global UNECE level, so that citizens from countries outside Europe can also benefit from the significant merits of an OTP, and be protected against worldwide cyber risks and threats by state-of-the-art security measures.