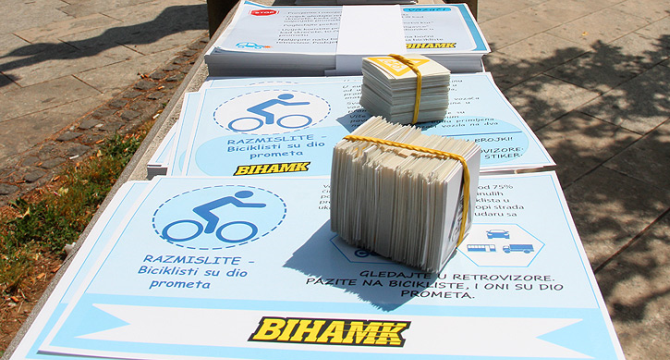 Bosnia and Herzegovina Automobile Club (BIHAMK) joined the international Think Bikes campaign due to over 90 deaths and 240 injuries among cyclists and motorcyclists in Bosnia and Herzegovina during the last three years. At the campaign launch on 14 May, BIHAMK, with the help of local Clubs from 13 cities throughout the country managed to distribute 30,000 stickers and educational brochures to drivers as a reminder to check their mirrors.

BIHAMK promotes the campaign on the Club’s website and social media with the Bosnian Think Bikes animation. Besides raising awareness among drivers, the Club also assists cyclists and motorcyclists to learn more about relevant traffic rules and the correct techniques in specific driving conditions.