This year’s Road Patrol Training for Excellence was organised in Luxembourg from 11 to 14 October. 14 road patrol teams, from 13 countries across Europe and 1 team from Botswana, joined the training. AMZS (Slovenia) was awarded Road Patrol Team of the Year after two days of training and assessments. ÖAMTC (Austria) and AA (United Kingdom) won second and third place respectively.

The Road Patrol Training for Excellence is a yearly event organised by FIA Region I and ARC Europe. The aim is to increase the overall standard of roadside assistance services by providing an opportunity for exchange on best practices and latest developments in the market.

Thomas Møller Thomsen, FIA Region I President, who was present during the event said, “I was impressed during the training when I saw the teams working on new types of vehicles, such as electric bikes and bicycles. With the growth of new technology and mobility devices, clubs have to be prepared and deliver services members need.” 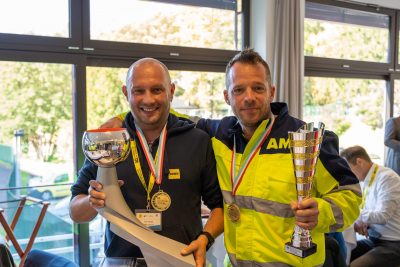 The Road Patrol Team of the Year, AMZS (Slovenia), shared their joy in winning this year’s edition in Luxembourg. “We didn’t expect to win but we are really glad that we won. But no matter how you see it, the goal was achieved, we learned a lot not just from the trainers but also from the other teams,” said Sašo Tomažič from AMZS (Slovenia).

“We decided to come because we wanted to learn more about electric vehicles. We know that these vehicles will come to the African market in only a matter of time, and it is important that we know the types of challenges we could be faced with,” said Simon Modisaemang, Managing Director of EA991 Emergency Assist (Botswana).