Today, Green NCAP publishes the results of three popular, high-selling cars. Two small-off roaders and one supermini. Of the three, the MAZDA2 comes out on top with an impressive 3½ stars. Ford’s crossover Puma checks in with a creditable 3 stars and the DS 3 Crossback gets a 2½ star rating.

The MAZDA2 was tested with the 1.5 litre Skyactiv-G petrol engine and turned in an impressive performance. The lightweight car scored particularly well for energy efficiency, with an index of 6.9/10 for this aspect of its performance. Control of pollutant emissions is good but the car would benefit from a gasoline particulate filter (GPF) as measurements of particulate numbers are elevated in some of the more demanding of Green NCAP’s tests. 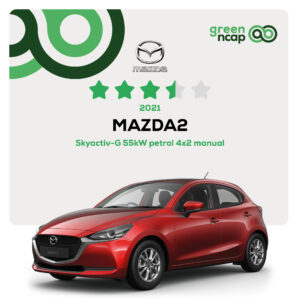 The Puma, Ford’s small crossover SUV, tested here with the 1.0 litre mild hybrid, direct-injection petrol engine, sits comfortably in the three-star band, with a good score for its energy efficiency and respectable results in control of pollutant and greenhouse gas emissions. Ammonia, NH3 , a pollutant which is not regulated by legislation, lets the score down in the Clean Air Index and an improvement in this area would surely have had the car joining the Mazda in the 3½ star bracket.

The DS 3 Crossback brings up the rear in this round of tests. Like the Ford, the DS3 Crossback’s struggles to control emissions of ammonia, and those of NOx also cause problems in Green NCAP’s tough robustness tests. However, the particulate filter fitted to the 1.5 litre turbodiesel engine works well, with particulate emissions well controlled in all tests. 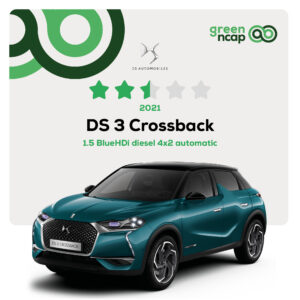 Aleksandar Damyanov of Green NCAP, says, “These tests prove that modern combustion-engine cars can perform well. Green NCAP’s tests will, we hope, encourage manufacturers to strive for the very best levels of emissions control and this means using all of the tools at their disposal. For instance, ammonia emissions need to be better considered in order to receive a higher rating. Particulate filters do a great job of controlling of very fine particles and the MAZDA2 would have performed even better if it had been fitted with one. But, in any case, congratulations to MAZDA on the impressive performance, especially in terms of fuel consumption.”